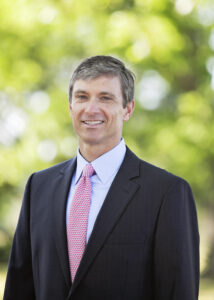 Before coming to South Georgia, Michael began his legal career in Rome and Atlanta, Georgia focusing on civil litigation.  Today Michael specializes a large portion of his civil litigation practice on creditor’s rights, and as Georgia counsel for the world’s largest provider of agricultural inputs and services, Michael practices in state, federal and bankruptcy courts all over Georgia.  He represents several agricultural suppliers and agricultural lenders and serves as counsel for Fortune 20 and Fortune 500 corporations.  Michael is also a Special Assistant Attorney General appointed by Georgia’s Attorney General, and in that capacity has tried cases to a jury in federal courts throughout Georgia. From his initial rating, he has maintained the highest possible AV rating from Martindale-Hubbell® Peer Review Ratings™.

Michael is married to his law school sweetheart Elizabeth who is also a lawyer in the firm.  They have two children, Sara and Andrew.